History of the
Truman Gillet House B & B 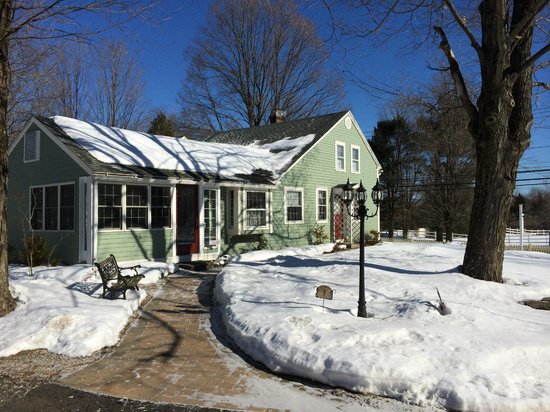 Brothers Nathan and Azariah Gillet lived in Granby on North Granby Road since before the Revolutionary War, making their living as farmers in a partnership that lasted until Azariah’s death in the early 1800s. Nathan married Dorcas Holcomb, and they had several children, one of which was their son Truman, who was born on July 29, 1783. By 1790 they had eight children and were living in a small house on the south corner of Creamery Hill Road and North Granby Road. By 1800 Truman began to take up his own farmstead and in February, 1805 Truman acquired from his uncle the three-and-one-half acre lot on which he built the house that now stands at 151 North Granby Road.

Most of the architectural material in the house is from the period between 1820 and 1850. The boards covering the corner posts, the 6-over-6 sash in the downstairs windows, the interior door handles and latches, the manner in which the interior doors are made and the use of the eyebrow windows on the front elevation are all evidence of work done in that period. Other features, such as the loose-laid fieldstone foundation, the round floor joists and roof rafters (some with the bark still on them), the machine-made nails, the bolection molding around the interior of the south and east entranceways, the 12-pane upstairs windows, the hand-hewn timbers, the use of yellow pine for flooring upstairs, the story-and-a-half framing and the V-shaped ridge pole, are all fairly generic to the first half of the 19th century.

Two features do place the house prior to 1820: the woodwork surrounding the fireplace, is a Federal Era (1780-1820) design; and the orientation of the house, with the eaves parallel to the street (rather than the gable end) was more popular prior to 1820. Combined with land, town and U. S. Census documents, the architectural evidence seems to confirm that Truman Gillet constructed this small, center-chimney, story-and-a-half saltbox house in 1805.

Truman married his first wife Sally around 1805 and had two daughters and a son by 1811. He made his living as a farmer and worked as a cooper (barrow maker) on the side. The bank panic of 1819 did not prevent Truman from purchasing approximately 31 acres along Salmon Brook on the north side of Mechanicsville Road and by 1822 he had purchased another 25 acres. He was married again in 1827 to Sophia Spring. Truman lived in the current home, which stands as a fine example of the sort of dwelling occupied by most people of the early 1800s. until his death in 1873 at the age of 90 and is buried in the Granby Center Cemetery.

This is just the start, there is plenty more history to read while you’re here.

The Truman Gillet House B&B is a cozy country retreat in Granby, CT within the picturesque Connecticut Valley of New England.